TO VARY OR NOT TO VARY? 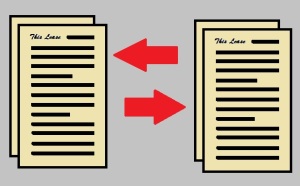 “BEING ASKED TO PAY A NOT INSIGNIFICANT AMOUNT FOR THE PRIVILEGE OF EXCHANGING A BAD LEASE FOR A WHAT MAY WELL BE ONLY A MARGINALLY LESS-BAD LEASE IS NOT NECESSARILY A GOOD DEAL.”

THE PLIGHT OF OWNERS OF MODERN, NEW-BUILD, LEASEHOLDS

A lot has been written about the plight of leaseholders, of mostly, newbuild houses and flats, burdened with “onerous leases” (as to the meaning of which there is no agreement). The Housing Act Trap has had the incidental effect of turning those with “onerous” ground rents  into assured shorthold tenancies, many of which, by virtue of those ground rents and other “onerous” terms are costly and impossible to ‘enjoy’ in both the legal and common senses of the word and impossible to sell.

Poor publicity has led many of the major national housebuilders, whose inventiveness (for want of a better word) created the problem in the first place, to offer lease variations, without, they would say any “onerous” terms.

“NOT ONLY GROUND RENTS THAT CAN BE ONEROUS; PERMISSION FEES, WIDELY CRITICISED AS BEING EXORBITANT HAVE BEEN INSERTED INTO “MODERN” NEW BUILD LEASES”

THE MEANING OF “ONEROUS”

Just dealing with what “onerous” actually means, the lack of agreement is highlighted by three pieces of evidence given in the course observations of the HCLG Select Committee’s enquiry:” The problem is that there is no real definition of what an onerous ground rent is.”– David Jenkinson, Group Managing Director and Main Board Director, Persimmon in oral evidence to the HCLG Select Committee, 19th November 2018.“ As Bellway, we do not have any onerous leases. Our standard lease is based upon a rent review based on RPI, which is acceptable to all the main lenders.”– Jason Honeyman; Chief Executive, Bellway – ibid.“ Ultimately the market will decide what constitutes an “onerous” ground rent.”– John Tutte, Group Chief Executive, Redrow plc in a letter to Clive Betts MP 10th January 2019

Don’t forget that it is not only ground rents that can be onerous; permission fees,widely criticised as being exorbitant have been inserted into “modern” new build leases which mean a range of perfectly normal things that would generally be part & parcel of the enjoyment of normal leasehold ownership, require not only the permission of the freeholder but payment of a sum which bears no relation to the cost and can only have been designed to turn a profit for the freeholder and/or their managing agents.

The term “onerous” is derived from case law and the debate about what it means as a matter of English is largely sterile because a competent conveyancer will not look at a term and ask: “Is it onerous?” but “Is this something which materially affects what the buyer is buying?”.

The recent Tenant Fees Act 2019, which does nothing to assist existing or long lease holders, does at least help provide some guidance as to what an onerous permission fee might be – essentially anything which is over £50 or not a true reflection of the cost to the freeholder, although if permission is required for a large range of utterly normal acts of enjoyment of a property, my advice would be that that in itself would make the lease onerous regardless of the cost of permissions.

“LEASE VARIATIONS THE HOUSEBUILDERS ARE OFFERING WILL NOT, FOR THE MOST PART, MEAN THE VARIED LEASES ESCAPE BEING ONEROUS. WHAT THEY GENERALLY WILL BE, HOWEVER, IS SALEABLE.”

The lease variations the housebuilders are offering will not, for the most part, mean the varied leases escape being onerous. What they generally will be, however, is saleable. The variations are, however, generally offered at a cost, which is not self-evidently fair, given that the original leases were, in the first place, onerous and marketed using what have been widely criticised as high pressure sales techniques.

I don’t know what I would do as a leaseholder offered a variation; the benefits of obtaining a saleable asset are considerable, particularly if there is a pressing need to move house but being asked to pay a not insignificant amount for the privilege of exchanging a bad lease for a what may well be only a marginally less-bad lease is not necessarily a good deal.

For those not contemplating moving in the near future, it may not even be a long-term solution because the mortgage industry has been even slower to take on board the ramifications of the Housing Act Trap and onerous permission fees than was the legal profession. What is mortgageable now may not necessarily remain so.

It seems fairly likely that whatever the political complexion of the government that eventually finds time for much more than crisis-managing Brexit, it will ban the sale of leasehold houses and put strict limits on ground rents under long leases of flats, so the current crop of leaseholds even post-variation, if they still carry high levels of ground rent and still include an extensive list of permission fees, could become unsaleable or much harder to sell when those reforms are introduced because the new leaseholds will be so much more attractive to buyers.

It needs to be borne in mind too that a deed of variation may well include a clause which prevents (or seeks to prevent) legal proceedings based, for example, on past mis-selling.

Some people are holding out hoping that the Government will come round to legislating retrospectively. Others are exploring enfranchisement or litigation options. There are other possibilities. In order to avoid a trading standards prosecution, Persimmon recently handed over the freeholds of new build homes in Cardiff but robust trading standards actions have been the exception rather than the rule and this is, therefore, a rare case.

What is clear is that there is currently no perfect solution. Conveyancers handling variations are not absolved of explaining the terms of varied leases and the terms of any deed of variation simply because the lessee is getting out of a very bad deal but it may be that those contemplating a variation ought to be given more wide-ranging advice about all their possible options than a conveyancer instructed simply for the purpose of a contemplated variation is qualified to give.

THE TENANT FEES ACT 2019: NO HELP FOR THOSE CAUGHT BY THE HOUSING ACT TRAP

Eight months before the much publicised Select Committee on Leasehold was launched on 24th July 2018,another enquiry had been launched on the 16th November 2017; the last evidence for that enquiry came in on the 26th February 2018 and the Committee’s report had been completed in March 2018. The product was a bill, which passed into law in June 2019 as the Tenant Fees Act 2019 and it is probably a wonderful bit of legislation, although, as ever, I shall hold fire and see how it works in practice before praising it too highly. It prohibits the charging of a lot of fees that landlords and managing agents currently charge and restricts the amounts which can be charged in relation to those fees which are permitted and provides a mechanism for varying leases so that terms do not conflict with the provisions of the Act.

While the Tenant Fees Act 2019 does not abolish leasehold, it might have provided remedies for much of what those saddled with burdensome modern long leaseholds find most problematic and as it applies to assured shorthold tenancies, it might have given a silver lining to the Housing Act Trap about which I have written quite a lot. But here is the rub; it is not retrospective and it excludes long leases. So it does none of those things for existing long leaseholders caught in the Housing Act Trap.

It is noteworthy that none of the evidence the Inquiry that lead to the Tenant Fees Act came from anyone affected by the leasehold mis-selling scandal but the Select Committee was the same and had the rolling behemoth of Parliamentary business checked, taken a breath and engaged in some joined-up thinking, it is possible that a much more worthy piece of legislation could have been produced. When the bill was debated, however, across four debates (two in the Commons and two in the Lords) only Maria Eagle raised the issue of long leaseholders and even then neither the long lease exception nor whether the provisions should apply to existing leases was discussed. Lord Shipley even seemed to think that long leaseholders were not afflicted by the same levels of charges and fees.

Under Section 28 “relevant person” has the meaning given by section 1(9) (and see subsection (2) of this section);

Section 1(9) defines a “relevant person” as(a) a tenant, or(b) subject to subsection (10), a person acting on behalf of, or who has guaranteed the payment of rent by, a tenant.

“tenancy” means—(a) an assured shorthold tenancy other than—(i) a tenancy of social housing, or(ii) a tenancy which is a long lease,…

Leasehold Reform, Housing and Urban Development Act 1993Section 7.— Meaning of “long lease”.(1) In this Chapter “long lease” means (subject to the following provisions of this section)—(a) a lease granted for a term of years certain exceeding 21 years, whether or not it is (or may become) terminable before the end of that term by notice given by or to the tenant or by re-entry, forfeiture or otherwise;(b) a lease for a term fixed by law under a grant with a covenant or obligation for perpetual renewal (other than a lease by sub-demise from one which is not a long lease) or a lease taking effect under section 149(6) of the Law of Property Act 1925 (leases terminable after a death or marriage or the formation of a civil partnership );(c) a lease granted in pursuance of the right to buy conferred by Part V of the Housing Act 1985 or in pursuance of the right to acquire on rent to mortgage terms conferred by that Part of that Act;(d) a shared ownership lease, whether granted in pursuance of that Part of that Act or otherwise, where the tenant’s total share is 100 per cent; or …